Thoughts of a plant nut.

At the moment I have quite a passion for Aspidistra. This houseplant has been around in this country since early Victorian times. It was first recorded by Kew Gardens in 1823, but it was named by John Ker Gawler i the year before, in 1822. For Victorians it was a sign of middle class stature to have an Aspidistra, so they often posed with them in photographs. The Aspidistra was one of the few plants that could cope with the effects of gas used for Victorian lighting, whereas other plants turned yellow and would perish. It is this rich history and the fact you can spot them in these old photographs that makes me love them even more.

When I started working at my current job three years ago, I discovered a plant which I had never seen before in an old cold frame. It was pot bound, dry, scorched and generally neglected. I asked the owner of that garden what plant it was, and it turned out to be a variegated Aspidistra elatior. It had survived several frosts in the garden there.

The only Aspidistra I had ever come across was the plain green one. The best use of it that I had ever seen was in a bridal bouquet. The entire bouquet was made purely out of green Aspidistra leaves, which had been folded over length-ways to form bow-like shapes.

A great part of the variegated Aspidistra had reverted to green. As I didn’t want to lose this unusual plant, I divided it, removed all reversion and potted the cuttings up in new compost. They all went back in the cold frame, apart from one, which I took home. It was a nice foliage plant which I had in my living room for a while, but then split again and used those parts in my tropical garden. I was amazed how well it did and how well it coped with cold weather and snow. 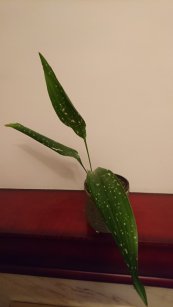 A few years later I got a spotted Aspidistra from the then Kent Collections Coordinator of Plant Heritage (see right). Unfortunately we don’t yet know which species this is, but the original plant came from Peter Smithers, who labelled it (incorrectly) as ‘Milky Way’. Getting this Aspidistra really awakened the urge to start collecting these beautiful foliage plants. I have since discovered how hardy some of them are, what a beautiful foliage plant it is for the garden, and how much shade and neglect they can take. I also discovered that they can flower, and how unworldly these flowers are!

Here are five of my favourites: 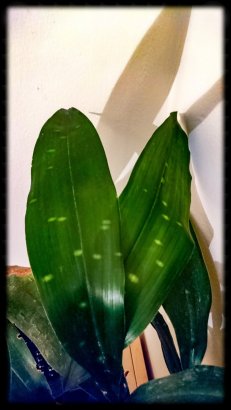 This species Aspidistra has quite big spots. They aren’t as abundantly present as on some of the others, but I quite like this. The plant is quite a fast grower, and will get to about 30-40 centimetres tall. When it flowers, the flowers will be white. It will survive outside in a sheltered spot and can take a couple of degrees of frost. 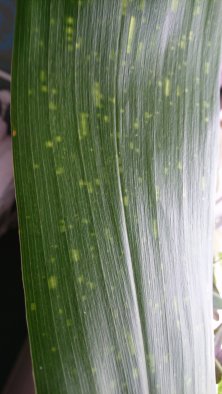 Of all my Aspidistra, ‘Taiwan Stars’ is my tallest one. The leaf on mine is 80 cm long at the moment and falls gracefully to the side of the plant, but they can grow as long as 1 meter. It was collected in Taiwan by Bleddyn of Crug Farm Plants, and in 2016 named by them. It is another one with delicate spots, but not as bright as some of the other Aspidistra spots. These are more of a lime green, which gives the leaves a great look. I can’t wait for this one to develop into a mature specimen. 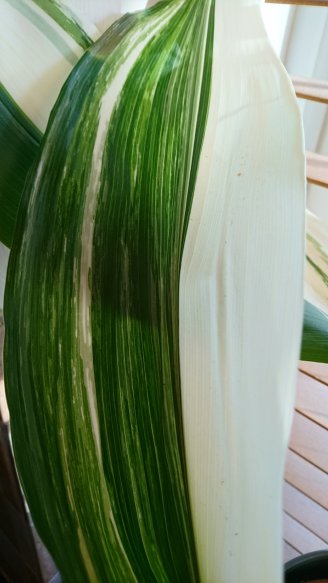 This is the plant I rescued from the cold frame at work. It used to be called Aspidistra elatior ‘Variegata’, but this is the proper name for this cultivar. These plants are very variable in variegation but that makes them different and interesting. From a central white line to leaves that are almost completely white, and anything in between. It does not like being in direct sunlight as the white in the leaves will scorch and turn brown. Despite being so white and giving the illusion of being quite fragile, it is very hardy. I have grown it in temperatures of -6C, but the RHS gives it a hardiness rating of H5, which means down to -15C. It loves dry shade, and because of the often very white leaves, it will brighten up any dark corner. This could be outside, or indoors of course.

This cultivar of Aspidistra is one you sometimes see for sale in nurseries. It is quite popular at the RHS Wisley gardens, however it is misnamed. The Aspidistra bearing this name here is really ‘Ginga’ or ‘Ginga Giant’. There is a ‘Milky Way’ Aspidistra though, but this is the one the Japanese call ‘Amanogawa’, as this is the Japanese name for the Milky Way. The true ‘Milky Way’ should have spots as well as stripes in the leaves and is very rare in this country. ‘Ginga Giant’ is a very nice, spotted cultivar. It is quite fast growing and hardy to -10C. the leaf pattern is unlike most plants you can buy here, so I think it is a beautiful addition to any shady spot. The leaf will go well with ferns, Hosta or even Helleborus.

This cultivar is one of my favourites because of its appearance, but also because of its name. It is also sold under the name ‘Yunnan Sunbeam’, but I am going to stick to the name ‘Uan Fat Lady’. It originates from China and is hardy to -15C. With these hardiness guides it is important to realise that Aspidistra do not like wet feet. Plant them in dry shade and they will be fine in winter. The leaves have stars and stripes, making it popular with our American friends. It grows up to 30 centimeters, and has a quite open habit. The rhizomes form strong growth shoots at the end. This is how the plant spreads and forms new leaves. It really does not mind drying out at all. Sometimes I don’t water this plant for 3-4 weeks, and yet it still looks as nice as it did the previous time I watered it.

Aspidistra have really stolen my heart. The history behind them, their hardiness, toughness and leaf patterns make an ideal plant for indoors and outdoors.

One thought on “The Aspidistra flies again”