Thoughts of a plant nut.

Last week I went to The Netherlands. I went to see family and friends, but also wanted to buy plants which I could use in my tropical garden in Kent during the summer. As I will be opening for the NGS this year, I felt that was a good excuse to get some more unusual plants.

My garden is heavily focused on foliage. It does have some flowering plants, but the majority of the time it is about leaves. This is why I thought I would buy some houseplants during my trip. I am particularly interested in Philodendron and Monstera.

When I visited the first garden centre with my sister and niece, I was rather overwhelmed by the choice. I am used to seeing large volumes of plants in Dutch nurseries, but the size of the houseplant department was enormous. It must have been the size of a football pitch. Most tables had a certain plant or plant group on them. There were several tables with succulents, but also one nursery bench completely dedicated to Calathea (see below), with around 10 different species and cultivars. And most noticeable was that most plants were around 8-12 euros, but no more than 18 euros at most. Having got used to UK prices over the past ten years, I wanted them all! 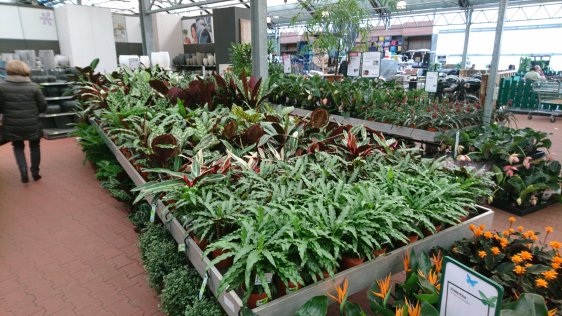 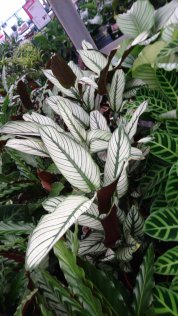 The second garden centre I went to was even bigger. Though the first and this one used to be part of the same chain, they now had a completely different assortment. Here I saw some amazing Alocasia ‘Zebrina’ (see below). The smaller ones were 8 euros (a 2 litre pot). They also had a range of Begonia that I have only seen at the specialist in the UK, certainly not in the average garden centre. 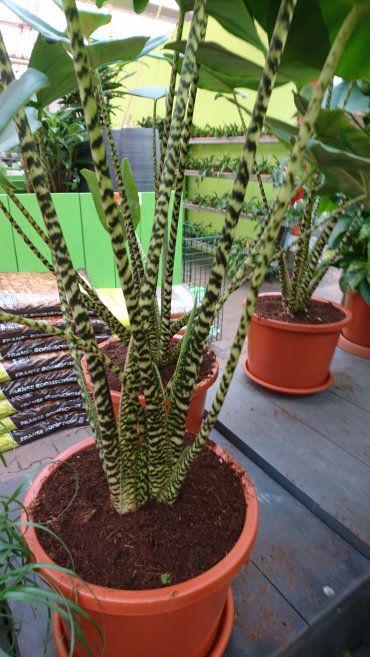 I understand the Dutch grow things in greater quantities, making production cost lower, and transport lines tend to be shorter, but a Philodendron I saw for 12 euros, would have a price tag of at least £30 on it here. From my experience in working in a Dutch nursery, I know that the cost price for them would be about 5 euros. Also the variety of choice is so much greater there, and I wonder why British garden centres are so far behind from this. Especially with the houseplant revolution here, why are the garden centre chains not catching up and offering a greater selection of houseplants?

I think one problem may be that people here tend to treat their houseplants as pets: it’s not just for Christmas; it’s for life. Where I work I removed a 14 year old Ficus benjamina from an office. It was looking ropey, hardly had any leaves, and the compost hadn’t been changed for the past 10 years. I was however told that it could not be binned, and to look after it in our nursery area. Dutch people seem to have more of an attitude towards houseplants as if they are cut flowers: once they don’t look nice anymore, they get composted. If this is the case, then garden centres would have a greater turnover of their stock, meaning they can get new plants in quickly. Not having to look after the plants in the garden centre for as long, also means the cost price of each plant is lower.

I do understand why plants are more expensive here than they are in The Netherlands. I don’t understand however why we are so behind in the variety of the assortment. I often see things on social media where people get told off for not buying from British growers, but I think this is comparing apples and pears as the range of plants that are on offer here, do generally not compare to foreign suppliers. I am of course not talking about the many specialist growers here as I know they often have far more unique plants than most Dutch nurseries, but I am talking about the general garden centres, where people could get far more enthused about gardening and growing plants in their homes if the supply was enhanced. I just hope that the houseplant revolution continues, and that it means that eventually the demand for a wider range of plants will mean that the suppliers tune into that.

One thought on “Plant buying trip to The Netherlands”